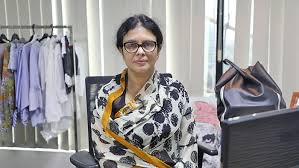 Rubana Huq is the managing director of the Mohammadi Group. She is the first female president of Bangladesh Garment Manufacturers and Exporters Association. She was featured in BBC 100 Women in 2013 and 2014, consecutively. Rubana Huq received Ph.D. from Jadavpur University, Kolkata in 2018.Rubana Huq writes regularly in national and international media outlets. In 2006, she won the SAARC Literary Award for her poems. She authored a book of poems titled Time of My Life.

Rubana Huq is a trustee board member of Asian University for Women.

Rubana Huq was the CEO of TV Southasia from 2006 to 2010. TV Southasia is a joint initiative of the broadcasters from the five countries of the South Asian Region, viz Bangladesh, Nepal, India, Sri Lanka and Pakistan.

Rubana Huq???s husband Annisul Huq (died in 2017) was the founder of Mohammadi Group. He was elected as the Mayor of Dhaka North City Corporation in 2015 on the ticket of Bangladesh Awami League. The couple has three children. All of them hold directorship at the Mohammadi Group. Rubana Huq???s brother-in-law Abu Belal Muhammad Shafiul Haq is a former Chief of Army Staff of Bangladesh.